If you follow me on twitter, or ate a meal with me in 2010, you most likely knew about my goal to eat at most 100 servings of meat for the year. I set out to achieve this goal because meat production is horrible for the environment, and the normal diet that I had previously was way to high in meat. All in all, I ate 98 servings of meat for the entire year.
All in all, I’m happy with how things turned out. It was a challenge at times, but also proved to not be as hard as I thought it would be. I very rarely purchased meat for my house which helped, and I often looked for vegetarian options when I went out. Let’s look at how things breakdown: 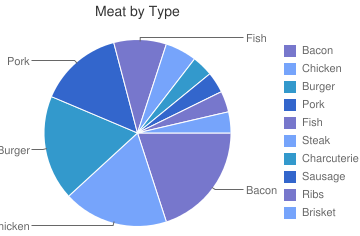 Bacon was my most common meat, which I had 18 times. I had Chicken in some form 16 times and a burger the same. The biggest surprise for me was the 9 times I ate fish.

I ate meat in every month. The lowest amount I had in a month was one in March and the highest was seventeen in May. On average, I had meat 8.17 times a month. Both the median and mode was 8.

I ate meat in 5 different metro areas. It breaks down as:

I’m going to continue tracking the amount of meat that I eat and keep it as a goal to not overdo it. I’m not going to have a specific number or goal in mind, other then “not too much”. Hopefully I’m able to not devolve into a carnivore.