Facebook released a script to create react apps with no configuration and I decided to give it a try.  Inspired by Melania Trump’s speech, I decided to build a generator for future speeches she may deliver to test drive it. 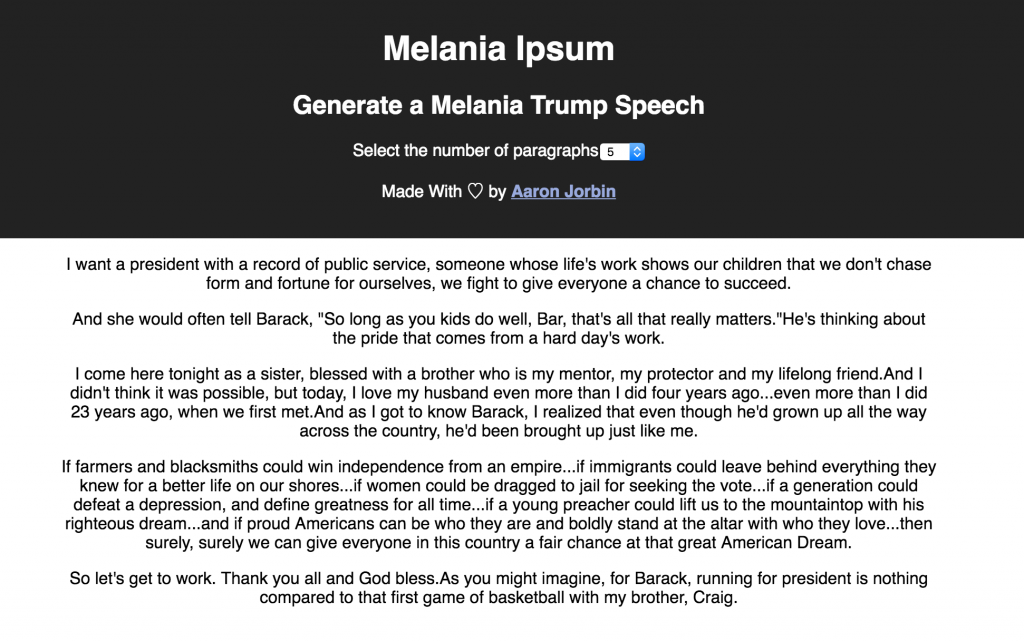 Getting started was straightforward. npm install -g create-react-app installed the script and create-react-app melania-ipsum ran it. In under two minutes, I had all the scaffolding I needed for a single page react app. Getting the app running in local development required entering npm start  and visiting http://localhost:3000.

Out of the box, eslint, babel, and webpack all are working together.  The eslint rules are not super strict by default and mostly aim to prevent errors.

Once I was ready to start developing, create-react-app got out of the way and allowed me to focus on the single page app I was building.  For mine, I had to find copies of Michelle Obama’s convention speeches (and not get too distracted reading through them), write a script to turn the transcripts into a javascript file, and focus on

Building my components, I was reminded that in JSX case matters and “to render a React Component, just create a local variable that starts with an upper-case letter”.

Another gotcha that I ran into is finding a good way to make sure Melania didn’t repeat any clauses.  I couldn’t use a property since I needed to change state inside the component and I couldn’t use a state since I needed the render method to trigger a refresh. I ended up using a plain old variable, though I’m sure there is a better way to accomplish this.

webpack EDIT: Turns out that this was unnecessary and I could have set ‘homepage’ in my package.json.

git subtree came in really handy for deploying to gh-pages. You can see the final product and create your own Melania Trump speech.

Overall, I would highly recommend create-react-app for simple single page react apps. I’m someone that really likes build tools and tends to spend a lot of time thinking about what the ideal build process should look like, so it was hard to give up some of that control, but the fact that I could go from idea to building a react app in a matter of minutes is a convenience that can’t be overrated. I look forward to using it again.

If you have a reaction, you should get a blog and send me a webmention or pingback.